Since our last post, we’ve been camping 20 yards from a Bastille Day disco, hiking 23 kilometres in 1 day (our longest yet with packs on) and walking alongside the River Meuse.

The Meuse flows north, leaving France just after the town of Givet, and goes all the way to the North Sea through Belgium and the Netherlands.

We’ve been walking against the tide from Fumay to Monthermé in France. We’ve just started walking along the River Semois which we’ll follow into the Belgian Ardennes and, ultimately, Bouillon.

Walking along the Meuse is easy thanks to a path called ‘the green route’ which runs alongside it. As you walk the path you see how important to the area the river is. Apart from all the people fishing from its banks, it’s also a route for small boats. Locks appear regularly so you often find yourself watching as the boats go through. From what we saw, the locals are looking to make even more use of the river. At almost every major town we passed a dam was being built, we assumed to provide electricity from the tidal power. Our first river town was Fumay. Like other towns along the Meuse, it sits in the loop of the river, like an island.

The land on one side of the river in Fumay is quite steep, so it towers over you. Together with the river it makes a beautiful view. The other thing we noticed at Fumay was slate. They’ve got tons of it. You see it in the hills and in all the buildings. For a grey(ish) stone, it’s full of colour and really adds to find the beauty of the area. We need to talk about Revin

Revin is south of Fumay and our second river stop. The first thing we noticed about it was its petanque club. The club is on the town’s west side and its many pitches spread along the bank. 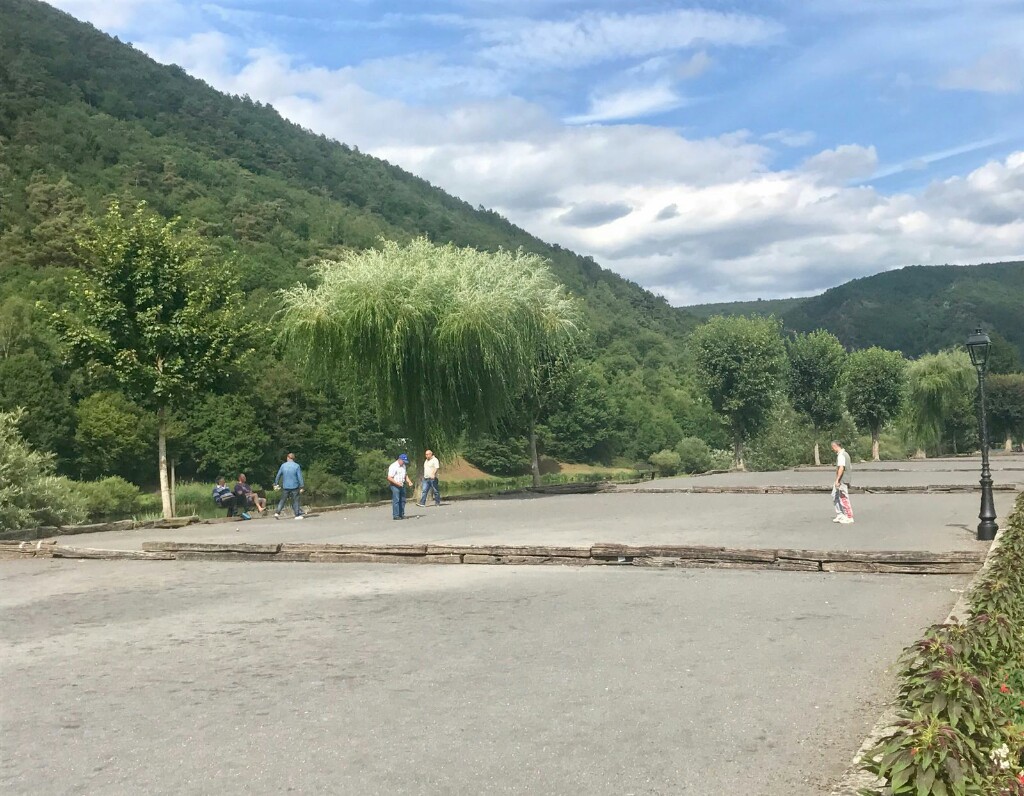 But our main memory of Revin is of camping there.

We were given a pitch between a sewer opening and the ping-pong tables. That was OK actually but on returning from a walk around town, we realised a festival was being set up with a stage 20 yards from our tent.

It took a while to shake all the euro-pop and French disco from our dreams.

The walk between Revin and Monthermé (the next town) ended up being 23 kilometres and it taught us a valuable lesson.

The beauty of walking the Meuse is the lack of any up or down to it. The river is always the lowest point and the flattest. But all the lovely winding loops mean you end up walking a long way to make progress in any direction.

I’d like to say something nice about Monthermé, and it looked lovely walking through it, but we’d come a long way and our minds were more focused on blisters and bed. Oh yeah, and along the way we saw a church that looked just like a cyberman. We’ve just started on the Semois so more on that to come.