We reckon we’ve walked around 180 kilometres in the Black Forest, winding our way down from Baden Baden (spa town and infamous England footballer base) to Triberg (home to Germany’s highest waterfall and a whole bunch of cuckoo clocks).

The Black Forest has been great for walking. There are well-kept paths that wind around the hills in a way that lets you cover height and distance relatively easily.

There are also signs which, despite their dubious approach to measuring distance, appear in all the places you need them. They also use consistent language and icons so you know when you’re on the right track.

Rest stops when you need them

There always seem to be benches at regular intervals, usually with spectacular views, so you can collapse in a heap for long stretches of time with plenty to keep you entertained. And you don’t just get any old bench. There are picnic tables and huts for shelter too. You always get the feeling someone’s thought of what it would be like to actually walk your route and what you’ll need when.

We’ve stayed at a couple of campsites (one small field, the other more of a holiday camp) but they’ve been few and far between. Most campsites we found in the Black Forest were just for mobile homes so we’ve mainly been staying in hotels.

Our first walks were along the Ortenauer wine route which runs along the western edge of the Black Forest. We were either walking in the hills with a view of the surrounding towns or down in those towns, looking up at the vineyards and forest. The hill walks were a mix of sunny paths in between the vines or shaded forest trails. There was a lot of up and down but there were only a few really steep climbs.

It’s not just grapes that people grow in the wine region. We saw loads of flower fields - some with honesty boxes and cutters so you could pick your own sunflowers en route. Very civilised. Most of the villages and towns we passed through were filled with traditional timber-framed houses, kept with obvious pride and decorated with tons of flowers. Lots of the villages looked a bit like somewhere the child catcher from Chitty Chitty Bang Bang might hang out but thankfully we didn’t notice any funny business. 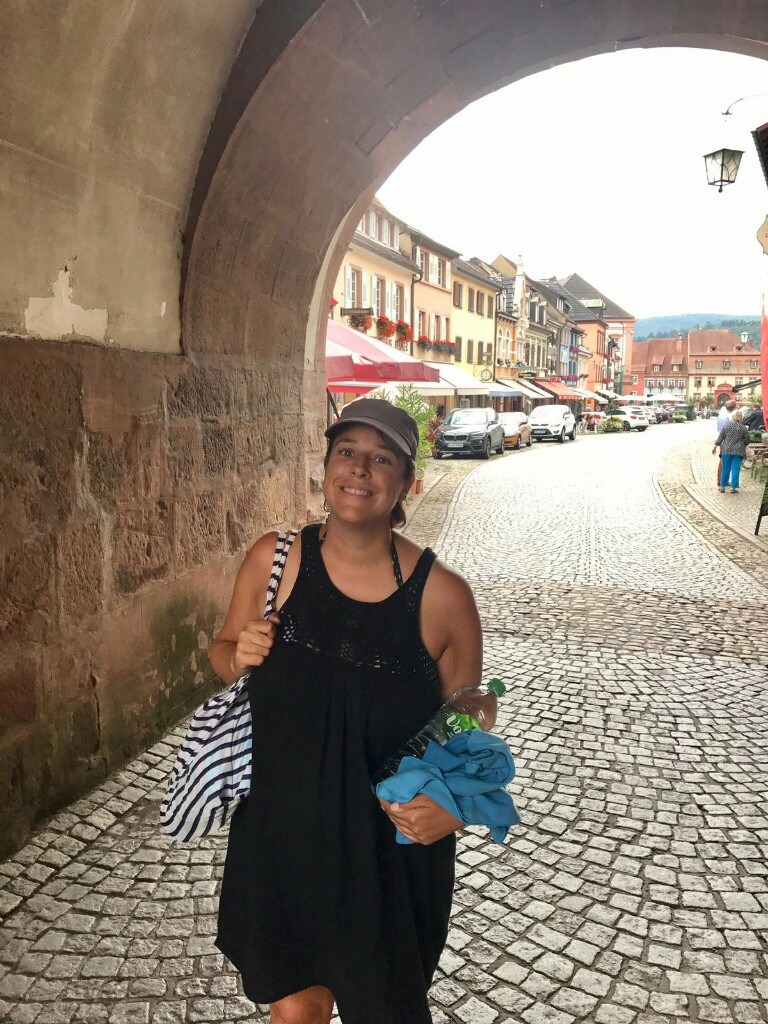 After the wine route we wanted to get deeper into the forest without having to tackle any hard climbs. Taking a tip from our time in France, we kept to the lowest point by following a river.

The Kinzig river divides the north of the forest from the south so was a good place to start.

This was quite different to walk. You’re surrounded by forest hills but the path itself was pretty flat so you could see quite far into the distance ahead. The Gutach was the second river we followed and it took us through Hornberg uphill to Triberg, 800 metres up in the mountains. It was great to feel like we were really in the depths of the Black Forest, but we were a bit over all the climbing by the end of our time there so we were happy to jump on an exciting, red train west to Freiburg. A lot of the places we’ve stayed in have given us a magical thing called a Konus Gästekarte. It’s a brilliant card that gives you free access to things like the local swimming pool or tourist attractions like the Triberg waterfall. It also lets you travel on pretty much all the buses and trains in the Black Forest for free. It’s really helped us feel like we’re getting the most out of our time in the Black Forest.